What are you five favorite record releases in 2012

What was you most memorable band moment?

Without any doubt the cruise 70.000 tons of metal. Hanging out with fans and other bands on a floating palace in the carribean cant go wrong.

What was the most memorable moment in your private life?

That is not such a great moment but its very memorable. My beloved mother passed away this year. I miss her much!

Which was the biggest party of the year?

The first night On our Anniversary tour in Buenos Aires we went out to Party.

Im not a heavy drinker at all, but this night was an exeption. I felt that I drunk to much and went back for the hotel. But instead I got lost in the worst part of Buenos Aires. Alone and blond with my passport and creditcard. But it was a lot of fun and I survived.

A I have to be a party destroyer and say my mothers death.

A LOT of work! The whole spring I will do the musical „Rock Of Ages“ in Stockholm together with Kee Marcelo and Joacim Cans. Then in the summer we might do some festivals with Therion. Then In the autumn and winter I wil continue with Rock Of Ages OR do a tour in Spain with a thing called Queen Symphonic Rhapsody. 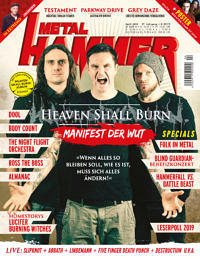