It’s show day number 2, and we hit the Autobahn again and headed for Munich. When we approached the city after some hours on the road, the thermometer passed 40 degrees celsius, and the heat hit us like a wall when we got out of the comfortably air-conditioned van. The Munich show was at the Backstage complex, which is a labyrinth of bars indoors and outdoors, beer gardens, and concert halls. The place kind of looks like a big, abandoned factory plant (and it probably is), overgrown with plants and trees, which gave you the feeling of being somewhere deep in a tropical forest.

It was another sold out night, and as soon as the doors opened, people started filling up the venue. In the extreme heat, the temperature rose fast inside the poorly ventilated club, and by the time we took the stage, the heat in the room was already pretty intense. But that wasn’t gonna affect our show. We pounded out our set as usual, winding the crowd up gradually, and by the end of the last number, Echoes Ring Forever, we had them completely under our control. The response from the audience was outstanding, especially considering that this was our first ever show in Munich.

The floor was completely packed during Clutch’s performance, who fired away an amazing set which included many of their very best tunes. In the extreme heat, it was quite a challenge to stay inside the venue too long at a time, and on the production bridge, up underneath the ceiling from where we watched, it was like being in a sauna. Naturally, the heat had to be made up for with plenty to drink, and we poured down our share of weissbier and lager throughout the evening. As the air outside cooled down after sundown, it was great to hang out in the outdoor area, enjoying our drinks and talking the usual bullshit that we do over a few beers. There were quite a few laughs, and the locals had to wonder what the hell is wrong with these crazy Norwegians, acting all silly and drinking ridiculous amounts of beer. Well, that’s the way we are, and I don’t mind making that impression on people. A little well-meant craziness never hurt anyone.

It’s a day off, and after spending the night in a band apartment by the venue in Munich, we hit the road again, heading for Cologne. The next show was in Hamburg the next day, but instead of a 10 hour drive straight to Hamburg, we decided to drive to Cologne and stay there overnight, before driving to Hamburg. It turned into a long drive, because of an immense thunderstorm that had raged NRW the night before and caused a lot of roadwork to clean up the damage. The storm had killed 6 people, so I guess we were better off spending a few extra hours on the road than driving through the storm the night before. When we finally made it to Cologne in the early evening, we checked in at the hotel and went out for food and drinks. We tried our best to set the city ablaze, but Tuesday evenings turned out not to be the best night for partying in Cologne, so it didn’t get too late.

We got up, checked out and hit the road towards Hamburg. It’s the third show night, and after a day off, we were psyched on rocking out again. The Reperbahn was lively as usual, and the strip clubs and sex shops always makes a special atmosphere. The venue for the night was Gruenspan, a very cool club right in the middle of the city, with room for at least 1,000 people. We loaded in our gear and went through the regular routine with soundcheck and a meal in good time before the doors opened and people started coming in. It was another sold out show, and by the time our intro track started, the place was packed. We went on stage and delivered to an amazing crowd, who responded with a roar and the vibe only got higher throughout the set. We finished with Pyromancer and Echoes Ring Forever with the crowd screaming for more. What an amazing audience! We could have gone on forever, but it was time to get the stage ready for Clutch. The place was steaming hot with so many people packed into the same room, and the heat made it almost unbearable to watch Clutch’s set from the balcony. Needless to say, it was another blistering show.

Hamburg has a lot to offer when it comes to late night activities, and after the show it was time to check out the nightlife. We started our round at a very traditional German bar, before moving on to a club later on. We were in a great mood after another brilliant show, so it was a perfect night for a few drinks.

The next day was a day off, so we had another full day to spend in Hamburg before driving on to the next gig. We were staying in an apartment right on Reperbahn, so we literally just had to walk out the door, and we were right in the middle of everything. We spent the day just chilling out, seeing the sights and hanging out at the local outdoor bars and restaurants. In the evening, there was a huge event just outside our apartment, showing the opening game of the Football World Cup in Brazil. So, it was unavoidable not to check that out. Later, we took a round at the local rock bars, and ended up at a great place called Night Light, in one of the darker back alleys of the city. They played some great music there, so we stayed there for a good while before heading back to the apartment. 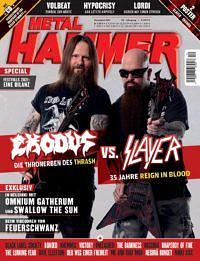