First of all, it’s great to be back out on the road again! To join the great Clutch on this round in Austria and Germany is truly a very cool thing for us. Second, it’s also very cool to share some of what’s happening on this tour with the readers of Metal Hammer. I’m gonna give you some of the highlights, and hopefully give you an idea of what it’s like being on the road with Sahg. ‚Cos it is great fun!

Our little trip had a kind of a rough start. We all showed up at the airport as planned, got checked in smoothly, and even had time for a couple of the world’s most expensive beers before boarding. You have no idea, the beers at Bergen airport, Norway, cost 10 euros for 0.4 liters. It’s a scandal, I know! But we had a few anyway, to celebrate the start of a great tour to come. The rough start kicked in after everyone had boarded the plane, all the baggage was loaded, and we were ready for take-off. That’s when the captain tells us there is an oil leak in one of the engines, that had been discovered in the last minute. All the passengers and baggage had to get out and be transported to a different airplane. This took some time, of course. But better late than dead in a plane crash. 1,5 hours delayed we finally got off the ground, and we were on our way!

We landed in Frankfurt well behind schedule, got our stuff and picked up our „mothership“ for the trip which was delivered at the airport, fully loaded with the drums, amplifiers, and equipment we needed for the tour. Our driver is a good friend of ours who is a huge Clutch fan, and to have the opportunity to see Clutch almost every night for a week was reason enough for him to accept the job. Good thing he digs Sahg as well, but nothing competes with his favorite band in the world, Clutch. Time will show if we can win him over by the end of the tour.

We eventually hit out on the Autobahn, and headed for Passau, which would be our stop for the night on our way to the first show in Vienna the next day. The hours on the road was passed with a few drinks and some good tunes on the stereo. The vibe was high, like it always is when we hit out on a tour. We made it to Passau, late but well, checked in and hit the sack for some hours of rest.

The next morning we continued towards Vienna, and made it to the venue well in time for get-in. Arena is a truly fascinating place, situated around the yard of an old slaughter-house in the outskirts of the city. The place has one big and one smaller concert hall, an outdoor stage, and the Arena Bar, which never closes before the last person leaves! There’s a genuine rock’n’roll vibe about the place, with lots of graffiti everywhere and the hardcore rock crowd of Vienna always hanging out. And on a night like this, with a temperature of 30 degrees celsius, the atmosphere was electric. We were playing in the big hall, which can hold 900 people. The show was sold out, the place was packed, and everyone was in a high mood.

Before soundcheck and showtime, we met up with the Clutch band and crew, who welcomed us in the most friendly way. You could tell these guys had spent their share of time on the road, very chilled out and extremely professional about their craft. As always on the first show night of the tour, there were a few complications and delays during set-up and soundchecks. But it turned out fine in the end, and after only a 20 minute set-up and soundcheck, we went on stage on schedule, at 8 p.m. sharp. The audience grew quickly during our opening number, Slip Off The Edge Of The Universe, and soon the room was filling up nicely, with some eager Sahg-heads clinging to the barricades, singing along to Firechild, Godless Faith, The Executioner Undead, Ether, and finally, Pyromancer. We got the crowd going quite well, with yells, horns and fists in the air on our command. Think it’s safe to say we did our job as opening act, and warmed the crowd up nicely for headliners Clutch.

After watching parts of Clutch’s set (which was outstanding by the way, what a setlist!) along with a very loud, high-spirited audience, we met up with some fans by the merchandise stand, as we always do, for some drinks and high-fives. After the show we hung out in the lovely outdoor area at Arena, had a few more drinks and talked to the local Vienna rockers. The night was warm, and perfect for chilling outdoors, before finding our way to the band apartment for a few hours of rest. 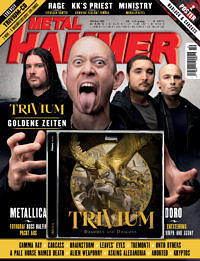