Day off in Cologne, time to check out this nice city, and not least the amazing Kölner Dom. The monstrous gothic cathedral is the inevitable centerpiece of Cologne, with its two black towers rising sky-high into the air. Standing in front of it, the colossal scale, the architectural detail and its general grim expression is just mind-blowing. On the outside, it looks like something built to worship Satan, rather than God! On the inside, however, it gives more the impression of a „regular“ cathedral, but the scale of things, the incredibly detailed ornamentation and the enormous stained glass art on the windows is still completely overwhelming. Regardless of religious belief, you can’t help being blown away by this breathtaking work of art!

Final show day with Clutch, and we are headed for Stuttgart. The drive goes through the Rhine Valley, with hills covered in wine fields as far as the eye can see. We reach Stuttgart and the venue LKA Longhorn early, and get to chill out for a while before loading in. LKA Longhorn is the largest venue on the tour, with space for 1,500 people. After Clutch’s soundcheck, we gather both bands on stage for a photo together and a final meet & greet before we part ways. As mentioned, we have had nothing but positive experiences with the Clutch guys, so there were all good and happy vibes. We went on with our soundcheck, and passed the time at the venue before showtime.

When we took the stage at 8 p.m., the room was already filling up nicely with a big crowd ready to watch our set. From the first note of Slip Off The Edge Of The Universe we could tell this show was going to be special, and the crowd livened up rapidly during the next couple of songs. LKA Longhorn has a very cool stage that gives you great contact with the audience, and there was some strong and genuine band vs. audience communication going on. Half way through, we had them in our clutches, and by the end of the set, the response was amazing, with the audience returning a lot of noise with their arms up in the air. It seems we won them over again! So our final show with Clutch definitely ended on a high note. 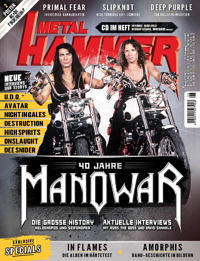